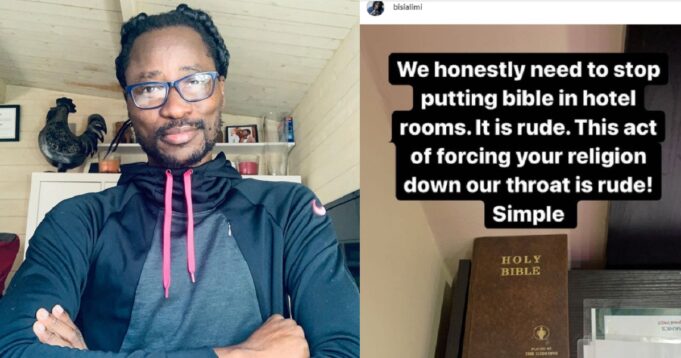 Nigerian gay rights activist, Bisi Alimi has taken a swipe at hoteliers for keeping the holy Bibles in hotel rooms.

In a post shared on his Instagram page, Bisi Alimi stated that the act of keeping bibles in hotel rooms is rude.

According to him, hotel owners are trying to force their religion down their customers throats and the act is “rude.”

In his words, “We honestly need to stop putting bible in hotel rooms. It is rude. This act of forcing your religion down our throat is rude! Simple”.

In other news, the popular Nigerian gay rights activist, Bisi Alimi, has taken to his Twitter page to reveal that he used to be a pastor that disliked gay people.

He wrote, “Will you believe if I tell you I used to be a very homophobic pastor back in the day. So I have been on that journey.”

“Thanks to the people that never gave up on me and walked the journey with me. However, it was a failed suicide attempt at 17 that started my journey to self-love.”

Bisi Alimi, gained international attention when he became the first Nigerian to come out openly on television as a gay rights activist”.