Home Entertainment News Runtown’s son suffers an injury on the eye after he slipped and... 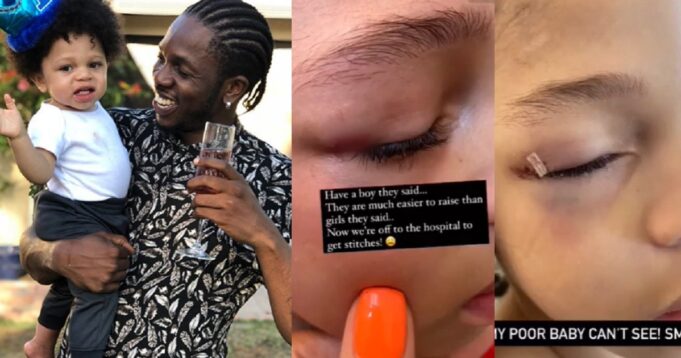 Popular Nigerian singer Runtown’s son, Zamar had an injury near his eye after he slipped and fell while playing around.

His mother, Selena, posted pictures of the injury he sustained on her Instagram Stories and explained that her little boy had to go to the hospital to have it stitched up because it prevented him from seeing.

“Have a boy they said, they are much easier to raise than girls they said now we are off to the hospital to get stitches.” She wrote.

In other news, it was a proud husband moment for comedian Seyi Law as his wife and mother of two bagged a BA from a UK university.

The overjoyed husband took to Instagram moments ago to congratulate his wife, Mercy Stacy Ebere, on her graduation from the prestigious Coventry University in the United Kingdom.

Sharing beautiful photos from the event showing his wife in a graduation robe, he recounted some of the struggles she went through, including losing a 5 month pregnancy and deferring for a whole year before she finally graduated.

He commended her resilience and declared that she weathered the storm and survived.