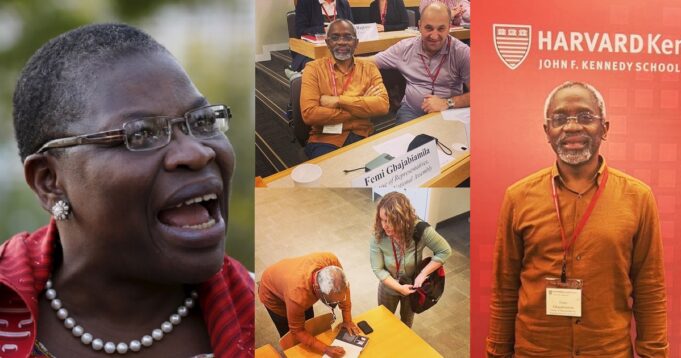 Former Minister of Education, Oby Ezekwesili has lambasted the Speaker of the House of Representatives, Femi Gbajabiamila, for posting photos from his class at Harvard Business School.

Gbajabimila shared the photos on his social media page on the same day members of the National Labour Union embarked on a nationwide rally in solidarity with the striking members of the Academic Staff Union of University (ASUU).

“Back to class. In a leadership course at @Harvard @Kennedy_School. Forget the number of grey hairs one is never too old to learn, broaden or sharpen your skills.”

Back to class. In a leadership course at @Harvard @Kennedy_School . Forget the number of grey hairs one is never too old to learn, broaden or sharpen your skills pic.twitter.com/br1Pqjyq8q

His post didn’t sit well with Oby Ezekwesili and she lampooned him for not caring about the suffering of the masses and taking a break from his office to pursue a degree in the United States.

“What do you folks do for Nigerians? What does Nigeria mean to you all?
What justifies your existence as our Legislative Arm in our Democracy? Is there anything about the dire state of Nigeria that worries you at all?

It is a monumental shame to have this massive body of lawmakers costing the country so much money because of your constant desire to take more than you give the country and people; and yet all we have is a Legislature on permanent break from the sufferings of citizens. SHAME.

The Arm of Government that came into existence and Nigeria became classified as a “Democracy” is the
@nassnigeria
.
It is that same Body that you two @SPNigeria The Senate President @DrAhmadLawan and @HouseNGR Speaker @femigbaja so POORLY preside over.
Wake up. Wake up. Wake up!”