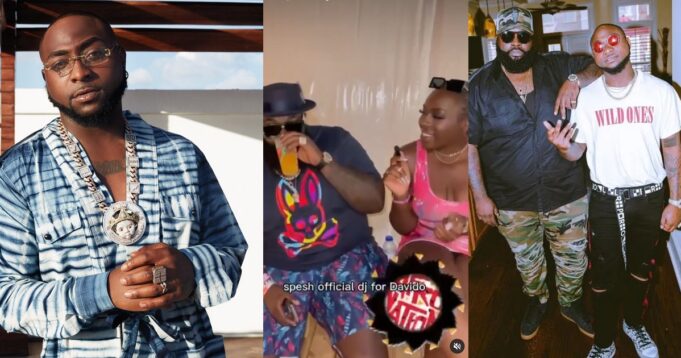 Nigerian singer and music executive, David Adeleke, popularly known as Davido, has reacted after his hype man, Special Spesh, was wrongly introduced during an interview.

Special Spesh was recently interviewed by Juicy J on Smade TV in line with the Afronation show. However, during the interview, he was introduced as Davido’s official DJ.

This caught Davido’s attention and he took to the comment section of the video and his Insta-stories to react.

Taking to his Instagram story, Davido teased Spesh, making a joke about the situation.

Sharing a video from the interview on his Instagram stories, Davido claimed that the wrong introduction ruined Spesh’s mood and had him step down with a drink.

A while back, Special Spesh took to his social media page to share his opinion on identity change.

Spesh said it is “wild AF” that people can choose what they want to be identified as.

“God already made that decision,” he added.

Spesh was probably reacting to the news of Young Nigerian man who shared his mother’s reaction after he used a photo of him dressed like a girl as his WhatsApp profile picture.

In the photo, the young man was dressed in a high school girl uniform, a blonde wig and fully made-up face. However, it is unclear if he is a crossdresser or the outfit was his Halloween costume.

Reacting to this, his mom expressed her disapproval with the outfit and pleaded with him to stop the ‘nonsense’.