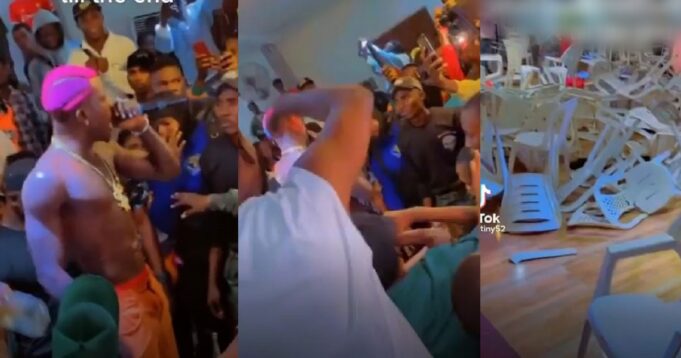 Controversial singer, Habeeb Okikiola, popularly known as Portable, allegedly got into a fight during a recent performance in Ogun State.

According to a viral report, the singer performed at an event that reportedly ended in pandemonium that the Zazu Zeh star allegedly provoked.

An alleged witness who shared the video which showed the state of the event center in Ogun state after the alleged chaos captioned it, “Portable in Ogun State; watch what happened next. Na fight end am, everybody japa; weyrey done scatter show by himself.”

In the video, chairs were seen destroyed and scattered at the event center.

The singer is, however, yet to react to the allegation.

The Ogun State Police Command had on June 20 instructed the music artiste to report himself to any of the stations in the state or face arrest after a viral video showed him telling some youths to beat up a young man and inflict bodily injury on him.

Portable did as instructed, and reported at the command’s headquarters in Eleweran, Abeokuta on Wednesday, June 29.

The spokesperson of the state police command, DSP Abimbola Oyeyemi, in a statement on Thursday revealed Portable reported at Eleweran at about 5pm on Wednesday, June 29 with his father and manager.