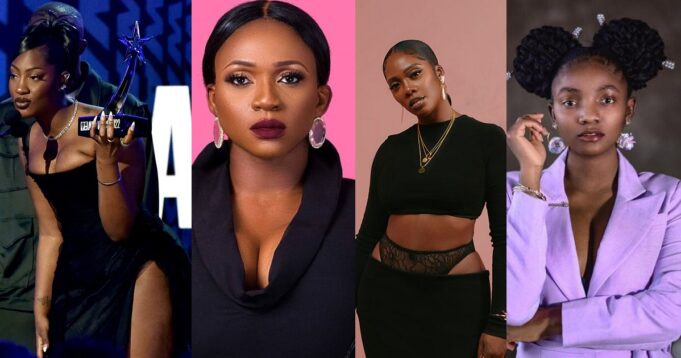 Nigerian singer, Tems has taken to her social media page to appreciate other Nigerian female singers, especially those who came to limelight before she did.

Tems recently won big on the International stage as she clinched two BET Awards; one for “Best international act” and another for “Best collaboration” which she won alongside Wizkid and Justin Bieber.

Shortly after her win, some fans began making snide remarks as they compared her with her colleagues and tried to crown her “Queen of Afrobeats.”

Tems has now shut those talks down with a humble post she shared where she appreciated Asa, Tiwa, Yemi, Waje, Simi and every other female artistes who in one way or the other, inspired so many people to do music.

I’m taking today to appreciate alll the Sisters today. Thank you for existing, thank you for deciding to get up and do something because someone saw that and became inspired by it. @Asa_official @Omawumi @TiwaSavage @yemialadee @OfficialWaje @SympLySimi @OfficialNiniola @amaarae @Gyakie_ @ayrastarr @faveszn @TeniEntertainer
When I see anyone of you gracing a stage, I feel like that’s me. We’re all winning and we’re about to move in like a Tsunami. So before it starts, know that Love lives on this side.
As we show the world how it’s done

And if I missed any messages it is definitely unintentional. I don’t take your kind words and support for granted. Sending you all love today because you DESERVE.
Love always❤️‍🔥