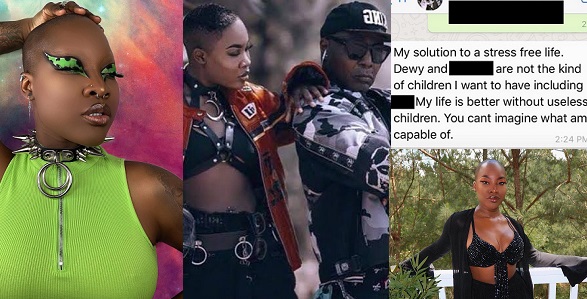 Dewy Oputa, daughter of veteran singer Charly Boy has taken to social media to negate her father’s claim of being proud and grateful to have a gay daughter.

Recall that yesterday, November 20th, the self acclaimed area father took to his Instagram page to claim that he’s close to his children and when Dewy told him about her sexuality, he accepted her wholeheartedly.

Charly Boy again took to Twitter, shared another post stating that he’s available to offer emotional support to other members of the LGBTQ community whose parents are not in support of their sexuality.

These Tweets apparently angered his daughter, and she took to the micro-blogging platform to recount how the singer ill-treated her after knowing about her sexuality.

According to her, her father is an hypocrite, that’s using her story to gain importance and followers on social media.

Dewy also shared screenshots of chats where Charly Boy referred to her and another child as “useless children” and said that his life would be better without them. As opposed to his claim of being close and proud of his children despite their decisions.

“Gaslighting at its finest. It’s quite unfortunate that my life is nothing but content I just can’t wrap my head around the hypocrisy. All this for a drop of clout,attention and praise from strangers just to feed your ego.

“Honestly I was going to just free this situation because I’m used to this toxicity and mentally I’m tired but after seeing this i can’t stomach this pretentious behavior anymore because on a normal level this man no Dey even pick my call.

“2017 I got kicked out of the house and was damn near homeless and if not for my friend I wouldn’t have even had food or Shelter! Fortunately for me I had a return ticket to come back to Atlanta, I moved back here with zero dollars not even knowing where.

“I was going to live or where my next meal was going to come from! I was literally living couch to couch and lord knows how tirelessly Iv worked so I could have my own stability!.

“You didn’t even know if your daughter was dead or alive anything could have happened to me. But on social media you father of the year. You have literally put Instant gratification from strangers before your own blood.”

Honestly I was going to just free this situation because I’m used to this toxicity and mentally I’m tired but after seeing this i can’t stomach this pretentious behavior anymore because on a normal level this man no Dey even pick my call. pic.twitter.com/Bc80xM9iOm