Home People Teacher who got impregnated by her student reveals she is keeping the... 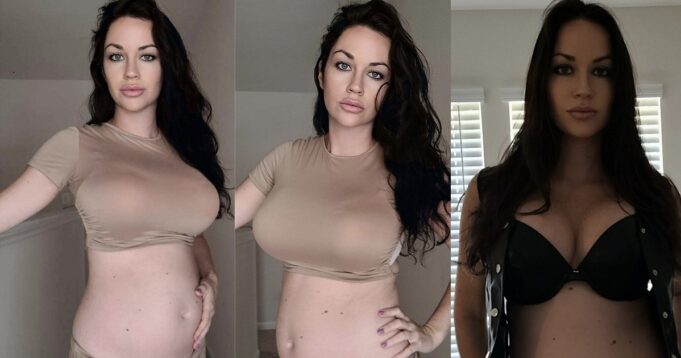 A history teacher who turned to an OnlyFans star revealed that she’s pregnant with a former student’s baby after a drunken one-night stand and she’s keeping the baby.

The lady, identified as Amy Kupps talked about her surprise pregnancy on Tuesday, June 28, stating that the baby is due towards the end of this year.

“It’s crazy that I’m having a baby with a former student but the same could happen in any profession.

“I might get a lot of hate or love from sharing this with the world but I’m a good person and will be a great mother to this child.”

Kupps, who ended her classroom career last year after her raunchy OnlyFans account was uncovered by officials at her North Carolina middle school, first met the unnamed former student back in 2016 when he was 16 years old. He now is 22 years old and is in college.

Kupps says she was out with friends at a nightclub late last year when she noticed a younger man giving her the eye, but she didn’t have an idea it was one of her old students.

The pair went home together for a one-night stand and it wasn’t until the next morning, when the man referred to her as “Miss Kupps,” that she realized who he was.

“He told me he was a former student of mine and even pulled out his yearbook to prove it.

“I was shocked. Let me be clear: I had no idea he was a former student and if I had known, I wouldn’t have gone home with him.”

Kupps claims she was embarrassed to have hooked up with a one-time pupil and left his home intending never to see him again.

But just weeks later, she discovered she was pregnant.

“When the pregnancy test showed up as positive, I was speechless,” Kupps declared.

“I’m a devout Catholic so abortion isn’t an option for me — though I support other women’s right to do as they please with their bodies.”

Kupps — who is already a mom to a son, 8, and a daughter, 10 — told NeedToKnow.online that the former student was “scared” when she told him she was keeping the baby.

“I’ve told him he doesn’t have to worry because I’m financially stable and I don’t want a relationship with him,” she explained. “I’m going to care for this baby on my own and we’ve both been content to go our separate ways.”

She continued: “His family has no idea, they would be so disappointed.

“If he feels ready in the future, he is welcome to meet his baby. He has a lot of good years ahead of him that he should enjoy. I certainly enjoyed my 20s.”