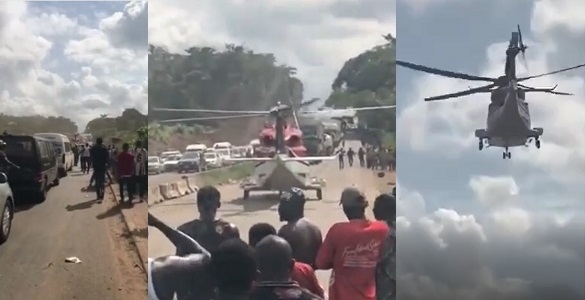 Fresh reports now indicate that the man who was picked up by a helicopter in the middle of a huge traffic jam along the Benin-Ore road was someone who had suffered a stroke.

Contrary to earlier reports that the helicopter had landed on the highway to pick up a billionaire who had been stuck in a four-hour long traffic jam, the helicopter operator says it is normal to respond to emergency calls.

Femi Adeniji from Tropical Arctic Logistics told the BBC that he didn’t understand why the video had caused such a fuss. He said it was normal for their company to respond to emergency situations, as there is no such public emergency service available – and they had done so six times in the last two months.

Young farmer brags about being richer than Yahoo Boys as he shows off farmland...

JUST IN: Kizz Daniel arrested in Tanzania for allegedly refusing to perform at his...

Horniman Museum in London agrees to return looted collection of 72 treasured artefacts back...

Tacha reacts after her fan trolled Kim Oprah for mocking her...

“The first shock that hits those arriving Lagos from an International...

EX-BBNaija housemates Dee One and Coco Ice reacts to report that...