Home Entertainment News “You were not what we wanted but we kept you” – Mark... 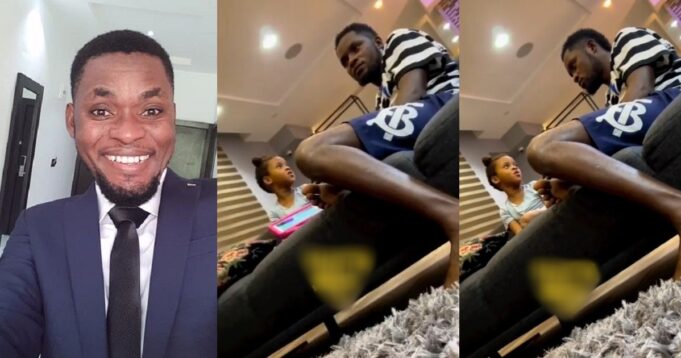 Popular content creator, Mark Angel, recently gave a brutal response to his daughter after she complained about not wanting her gadget.

The father-daughter duo were having a chit-chat in the living room when Mark’s daughter who was holding a kid’s android tablet, told him she doesn’t want that type of tablet.

In response, the content creator tried to pacify her and told her to continue using it pending when he gets a new one, however, she insisted on getting a new one.

Frustrated by her incessant complain, Mark Angel gave her a savage response and told her about the circumstances surrounding her birth.

According to him, when he was dating her mother, she (his daughter) was not what they were expecting yet they still kept her.

However, it’s not clear if he meant his daughter was conceived by mistake, or if they were expecting a male child instead.

“When I was dating your mum, you were not what we wanted but we kept you,” he said in a now-viral video.

A while ago, massive reactions trailed a dance video posted on video-sharing platform, TikTok, by popular kid comedienne and actress, Emmanuella.

The actress who became an internet sensation after filming short comedy skits under the umbrella of Mark Angel’s comedy, took to TikTok to share a video of herself doing the popular ‘Kelly’ dance to Wande Coal’s ‘Gentility’.

In the video, the 12-year-old celebrity who is slowly evolving into a beautiful young woman, donned a sleeveless black and white mini-dress and is seen shaking her waist and showing off her hips.

The video has caused quite a stir on social media as netizens opined that she’s too young to be dressed and dancing in such manner.

Some others had a field day sexualizing the teenager and saying she’s ‘ripe’, while others made jokes about Ned Nwoko coming for her. Watch here