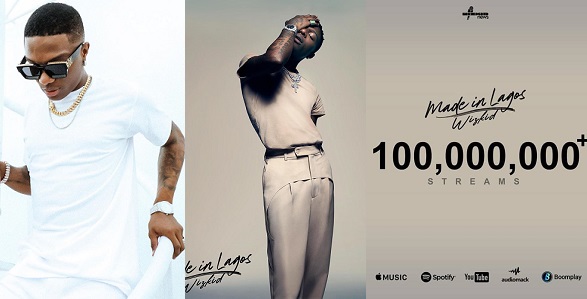 The much anticipated album by music sensation, Wizkid, “Made In Lagos” has garnered over 100 million streams across digital music streaming platforms.

The much anticipated album was finally released October 30th and has accumulated over 100 million streams in less than 10 days.

According to the report available on Wizkid’s official fan page, the over 100 million streams are accumulated streams from Apple Music, Spotify, YouTube, Audiomack and Boomplay.

The outstanding feat was announced by Wizkid’s official fan page and news platform on Instagram in the late hours of Sunday, November 8th.

Recall that the award wining music sensation has bragged about his music doing well without promotion.

According to him, he’s not in the habit of promoting his songs but loves making good music.

The Ojuelegba crooner made this statement during an Instagram live session, while confirming a fan’s claims of he not promoting his songs.