Home Entertainment News He is Wizkid’s Replica — Boluwatife is the true son of his...

Wizkid Ayo Balogun is a father of three boys but the most popular and recognized of his three sons is his first – six year old son, Boluwatife born to him by Oluwanishola Ogudu.

Boluwatife who unlike Wizkid’s two other boys didn’t come with any controversy, hide and seek or denial is growing into a lovely young boy and very much his father’s look alike.

Like a loving father, Wizkid is fond of sharing time with his son whenever he is around in Lagos.

Boluwatife according to stories shared by his mom Shola is the perfect son to have!

Recall that Wizkid had the boy when he was just a young man of twenty one himself and he already has so much going on for him as far as offsprings are concerned!

Wizkid had Boluwatife when he was just 21, at the beginning of his music career. 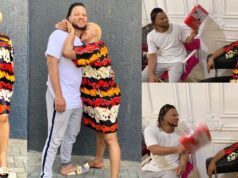