Home Viral Woman cries uncontrollably after opening a bale she bought and discovered it... 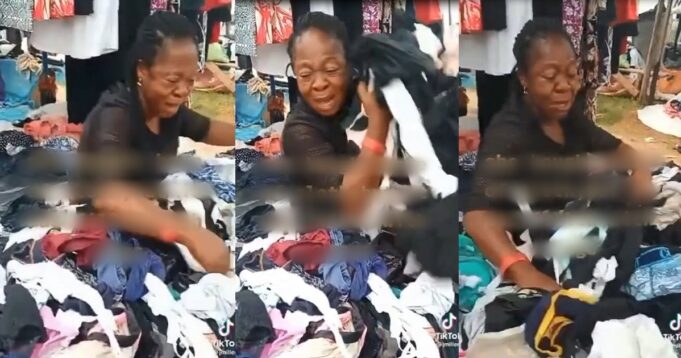 A heartbreaking video circulating online shows the moment a businesswoman broke down in tears after opening a bale she bought and discovered that it was filled with rags.

In the video, the distraught woman who sells second-hand clothes also known as Okrika, could be seen crying uncontrollably as she checked the clothes in the bale.

According to her, she borrowed the money used in buying the bale and now she’s left with nothing because she can’t sell the rags.

She is heard saying, “God wetin I go do? I no get husband, children dey for school, God where are you”.

In other news, a video making rounds online shows the moment a die-hard fan of award wining singer, Burna Boy, broke down in serious tears during the singer’s performance at a recent concert.

The self-styled African Giant graced the stage at the just-concluded Kadetten 2022 Festival in Norway and gave a stellar performance as usual to the trill of the audience.

However, a European fan couldn’t contain his emotions as the singer was performing one of his hit songs “Gbona” and began crying like a little baby.

The young man who is obviously a staunch fan of the Grammy Award Winner by reason of the customized chain with “Burna Boy” pendant he wore, is seen in a trending video weeping profusely while singing along with the singer.