Home Viral “I will not worship at Catholic Church again until Fr. Mbaka is... 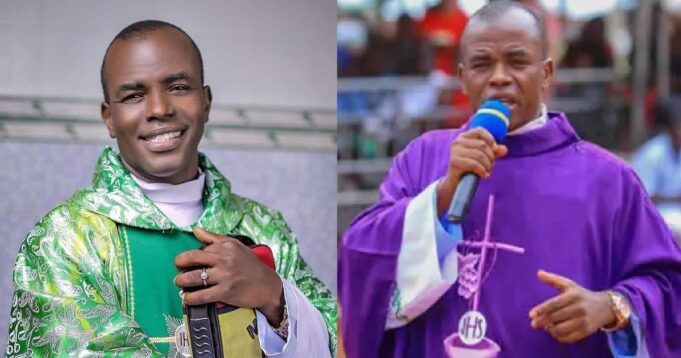 A Nigerian man has vowed not to worship at Catholic Church again until Father Mbaka is recalled and his church – Adoration Ministry – is reopened.

It would be recalled that the Catholic Priest was sanctioned over a comment he made about the Presidential Flagbearer of Labour Party, Peter Obi.

While preaching to his congregation, the cleric had said Peter Obi is too stingy and unfit to be the next President of Nigeria.

Following the statement, the Catholic Bishop of Enugu Diocese, Calistus Onaga, told him to embark on a one-month retreat.

His church, Adoration Ministry, was also shut down pending when he returns from the retreat.

Reacting to the development, a Nigerian man identified as Akanchawa Orba, took to Facebook to state that he would not attend Catholic Church again until Father Mbaka is called back.

“I will not worship at Catholic Church again until Rev fr mbaka is called back and adoration ministry is reopened” he wrote on Tuesday, June 28.

A while ago, Bianca Ojukwu, the widow of former Biafra president, Chukwuemeka Ojukwu, has narrated an encounter with Peter Obi, the presidential candidate of the Labour Party (LP), in 2009.
The diplomat was reacting to the outburst by a popular cleric, Fr. Ejike Mbaka, who said the former Anambra State governor will never become the next President of Nigeria because he is “stingy”.

While speaking to members of his church on Wednesday, June 15, Mbaka said a stingy man cannot be Nigeria’s president because Nigerians are hungry and they need a generous man.