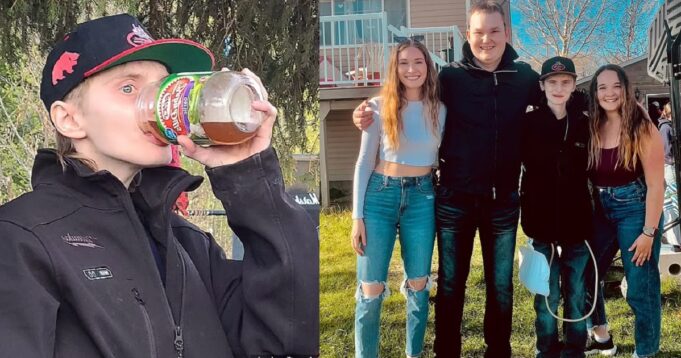 A Canadian man, Eric Coulan, has decided to end his life by assisted suicide after a long battle with a life-threatening health condition.

The 20-year-old former mechanic threw a farewell barbecue party on May 22 with close friends and family in attendance as he prepares to off himself.

Eric had been suffering from severe abdominal pain for the most part of his life but doctors were unable to diagnose him, and only said he had a blockage in his intestine.

It was gathered that he visited seven different hospitals in Canada but doctors couldn’t diagnose the cause of his ill health.

When he fell seriously ill in 2020, doctors had to carry out an emergency surgery on him to remove part of his lower intestine.

However, during the surgery they couldn’t find the blockage in his intestine and in the process, his intestine got ruptured causing sepsis.

His health condition continued to deteriorate after the surgery in 2020 and he has been carrying a colostomy bag everywhere he goes.

Doctors say his only chance of survival is to undergo six organ transplants which they have never tried before.

Following the prognosis, Eric has decided to use Canada’s Medical Assistance in Dying (MAID) law to end it all painlessly by taking drugs administered by a doctor.

Speaking to a local media outlet, he said, “There’ll be an end to suffering. I suffer all day long. I’ve been in a four walled room for a very long time and I’ve just had enough.”