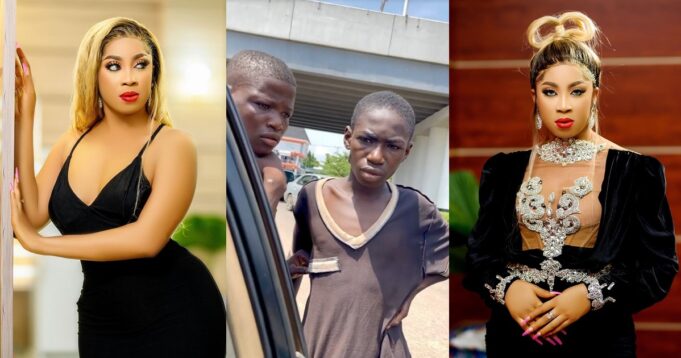 Nollywood actress, Amarachi Igidimba has shared her bitter experience with some street urchins she offered to transform their lives.

Taking to her Instagram page, the actress disclosed that she helped them with money, new clothes, registered one of them in a mechanic shop to learn a skill while she gave the others capital to start a pure water business.

However, she received a rude shock when they all threw caution to the wind and returned back to the street to continue their evil ways.

Amarachi who was pained by the incident shared a video of the young boys and wrote,

“I made this video since June 13th but decided not to post but leave them to God, I have been getting a couple of dms of people wanting to know their progress, but I ignored those dms to avoid long story until someone wrote me saying ‘Watsup with those boys ? this one we haven’t seen update or have you abandoned them like you celebrities promise and don’t fulfil’ , so I thought it’s time I did this , the one on a clean hair cut is the one that made me register him as apprentice at a mechanic workshop ,I don’t want to mention how much I spent’, I gave him money to clean up , feeding money , and also asked my sister to go buy him new clothes, the 2nd day after his resumption I went to check on him at the workshop and was told he didn’t come, so I drove to interbua (the spot I met them ) to look for him , he saw me and tried hiding but I already saw him only for me to hear from one of them later that he said he wanted to go to Benin and learn ‘yahoo’ that he wasn’t interested in being a mechanic, a job he made me waste my time and money on then 3 people out of the 5 that I gave rubber and money to start pure water business already abandoned everything and ran away to Benin to continue their street life because I threatened to arrest them if I saw them loitering about the street again after trying to set them up , the remaining 2 that are in this video said police ceased their rubber.

I went to confront the police why they would do that and was told that they tried mo*esting/r*ping a girl and that was why their things were taken from them including the slippers I bought for them , as punishment , all this and more unprintable tales the police told me about this boys in front of them and they didn’t deny it. There and then the tall one on black shirt begged me to take him home to his parents that he hasn’t been home in 3yrs and he is tired of street.

The police warned me against involving myself further but my good heart was still willing to help , so I invited him to my office , gave him water and soap to bath then gave him money to go cut his hair , At least not go home after 3yrs smelling and looking like a mad man , we agreed he waits for me at interbua to pick him up in another 1hr ,I got there he wasn’t there, that was the last time I saw him till today ….. Exactly as people warned me about ,this boys did , I do not regret helping but I have learnt that not everybody that looks NEEDY is IN NEED 📌”