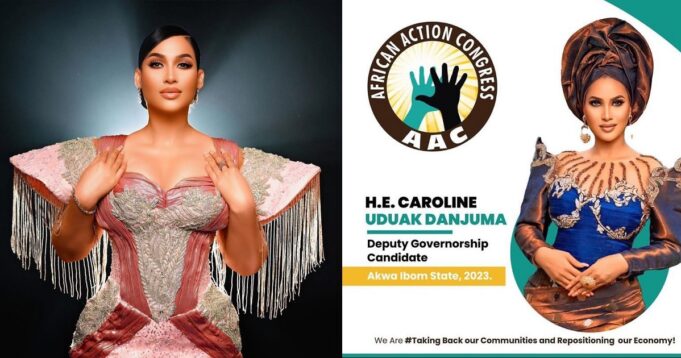 Popular Nollywood actress, Caroline Danjuma has been chosen as the running mate of the gubernatorial candidate of the African Action Congress (AAC) in Akwa Ibom state.

The movie star has joined the league of Nigerian celebrities to join the political space in recent times, following the train of actresses, Funke Akindele and Tonto Dikeh, who are the deputy governorship candidate of Lagos and Rivers state respectively.

Caroline took to her Instagram page to share the news with her fans and followers on Monday, July 18, while pledging to serve the people of Akwa Ibo state.

She shared a picture of her campaign poster and wrote,

“To serve and to honor in loyalty and in truth to Akwa Ibom and Nigeria. So help me God….”

A while ago, Caroline for the first time spoken about her divorce from her estranged husband, Musa Danjuma.

The mother of three while advising people going through a divorce noted that that her divorce from Musa Danjuma made her feel like a failure.

According to her, she blamed herself for not having a perfect marriage and for the mistakes they both made in their marriage until she embarked on a journey of self-discovery, which helped her heal from the hurt and realize her failed marriage does not define her.