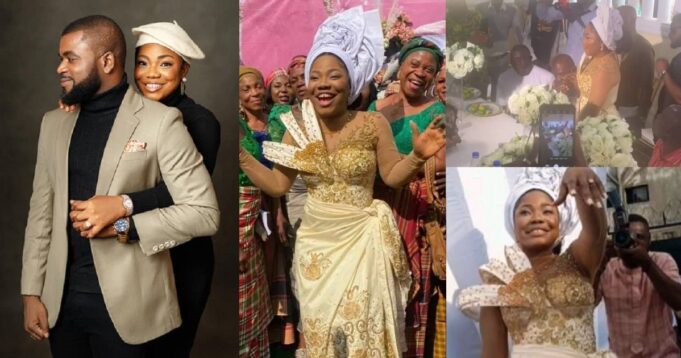 It was a joyous occasion as the families of popular gospel singer, Mercy Chinwo, and her fiancé, Pastor Blessed Uzochikwa, formally met ahead of their marriage.

The wedding introduction of the singer and her fiancé, Pastor Blessed, the head pastor of The Water Brook Church, Lagos, was held on Monday, July 18 in Port Harcourt.

The couple had announced their engagement in June.

Photos and videos from the event have been shared online.

In other news, Mercy Chinwo, and her fiancé, Pastor Blessed, recently stirred hilarious reactions after a video of him introducing her as his sister again surfaced online.

It would be recalled that shortly after the duo announced their engagement, netizens dug out an old video of the clergyman stating that Mercy was like a sister to him.

However, during a recent visit to Streams of Joy pastor, Jerry Eze, Pastor Blessed, took a jab at himself about the sister tag.

Introducing his fiancée to Pastor Eze, he again described her as his sister, which made all three of them burst into laughter.

“Man of God, I brought my sister to you,” he said.

Pastor Eze then gave a hilarious response, which made them laugh even more.

“She is like a sister to you, this is a clear example of what God cannot do does not exist”, he said.