Home Entertainment News Actress, Carolyna Hutchings reacts after being called out for allegedly lying about... 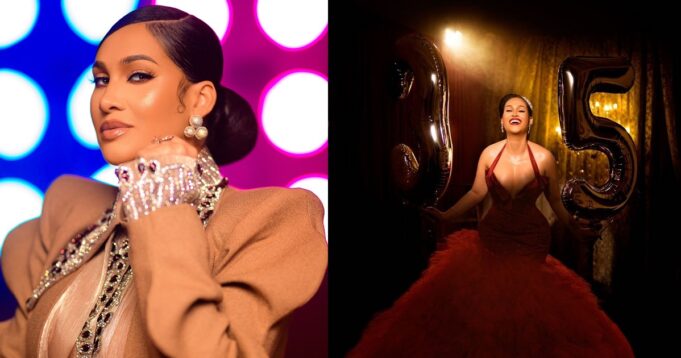 Popular Nollywood actress, Carolyna Hutchings, has reacted to the controversy about her age after she celebrated her 35th birthday on Sunday, June 26.

The thespian, whose Wikipedia information states that she’s 42 years old, stirred reactions after she took to social media on Sunday to celebrate her 35th birthday—Carolyn shared stunning photos of herself holding a giant 35 balloon to mark her new age.

She was tackled by a number of Nigerians on social media, including a movie producer who is acquainted with the actress, for allegedly lying about her age.

The producer claims Carolyna is four years older than she is, and yet she is claiming to be 35 years old when she is currently 38.

“Lol, Ekanem please. No be only 35. When i co- produced my first movie “foreign affairs” which you starred in, I was 18 and you were 22. I’m 38 today. Na Twitter people una go dey bobo like this,” the colleague wrote.

Another Twitter user, claimed Carolyna Hutchings has been claiming 35 since 2007.

Interestingly, the tweep’s comment caught the actress’ attention and she reacted.

“Your mother, the old witch, is the liar,” she tweeted in reply.

Carolyna’s response has, however, stirred fresh reactions on social media, with many berating her response. See some comments as you scroll.

@Sir_Experience wrote, “LoL People are calling you out for falsification of your age the next thing is to call their mother an Old witch. No forget say you self don dey old is a matter of time😂”.

@savageCross71, “She herself be old witch naim make the matter dey pain am”.

@raytedRay7, “Your lies have now made you to be cursing on a day like this..”.

Taking to her Instagram page to further address those doubting her age, Carolyna shared a photo of herself with her mum, who she says is in her 50’s, and wrote,

5. Reduce my age for your validation ?? I DONT GIVE 2 F’ssss about you sugar
6. Not everyone in a class are the same age . In secondary school I had people 5 years older than me in my class , in uni my assis rep was 45 years old , in my masters my class rep was 23 and I 34 , my MBA I had both young and old …
7. Just because you acted a movie with me does NOT mean we are the same age ..
8.. you are asking for my birth certificate , have you seen your own mother and fathers birth certificate before ???”