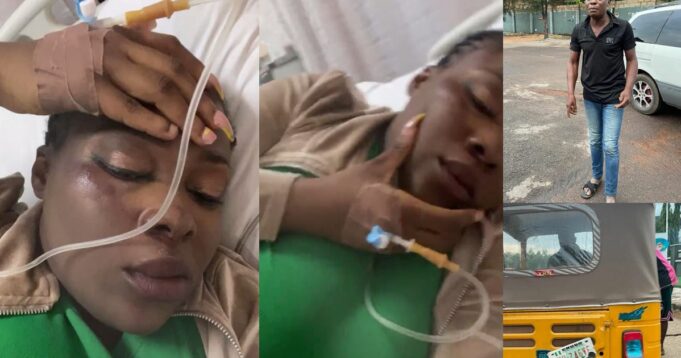 Popular Nollywood actress, Ejine Okoroafor, has been hospitalised after narrowly escaping death at the hands of a commercial tricycle rider in Enugu state on Monday, July 11.

In a 14-minute long video recounting her experience with the tricycle rider, Ejine Okoroafor said she was almost abducted when returning from a location.

According to her, she was on her way to her hotel after she finished shooting at a movie location when she boarded a tricycle. She said she became uneasy when the tricycle rider decided to buy fuel on their way.

She claimed that after expressing her displeasure, the man became enraged and kept driving while muttering to himself. She said that she was frightened and requested that he drop her. The driver allegedly refused and kept going, claiming that he assisted her despite it being a “Sit at home” day.

She said that she leapt off the trike out of fear for her life. Meanwhile, her gym bag was still hooked up to a part of the tricycle, and rather than stopping, the driver kept driving, dragging her along.

Ejine said the driver did not stop until passersby rushed to her aid and beckoned on him to stop. She stated that residents who rushed to her aid then phoned her location manager, who came to take her to the hospital.