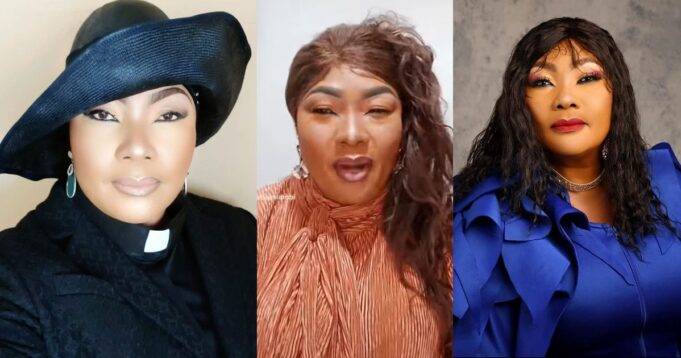 The self-styled evangelist had in a video shared on her Instagram page said people who advise engaged couples against having sex before marriage are out of their minds.

According to her, it’s pure wickedness to tell single folks not to engage in premarital sex as they would not be able to test their sexual compatibility with their intended spouse. ICYMI

The video was met with mixed reactions from social media users who disagreed with her stance while others opined that she was being sarcastic.

Well, the thespian has  now shared a follow-up post where she made a U-turn on her previous statement.

She said dating is not a time for sexual intercourse, but a time to get to know your intended partner.

“Dating/courting period is a time for interview to know each other better: With respect to getting basic information such as visions, values, beliefs, family, etc.

So that if you find them unworthy and unqualified you cut them off easily. It’s not a time for sexual intercourse. 2 Timothy 2:22.

Truth be told how many people are you going to have sex with just because you are dating or in courtship towards getting married ? Okay you had indulged in sex in the past all because you had been proposed to or you have proposed , but now that you are wiser : DO YOU STILL KEEP JUMPING IN THE BED AND ARMS OF EVERYONE?”