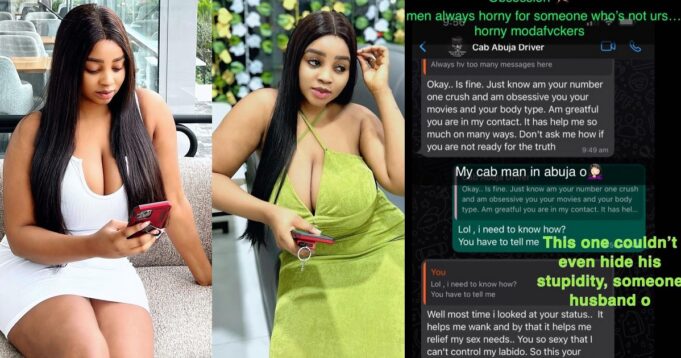 Nollywood actress, Peju Johnson, has shared the lewd messages she received from a married taxi driver.

The cab driver apparently had her number because she had used his services a few times. Following that, the cabbie contacted her on WhatsApp, confessing that he’s obsessed with her.

He thanked her for being on his contact list and went on to recount how the number had helped him in many ways.

“Just know am your number one crush and am obsessive with you, your movies and your body type. Am grateful you are in my contact. It has help me so much on many ways. Don’t ask me how if you are not ready for the truth.” He wrote.

“You so sexy that I cant control my libido,” he said.

Sharing a screenshot of the chat on social media, Johnson revealed she blocked him afterwards.