Home Entertainment News “Atiku took me in when I didn’t have anywhere to go. He’s... 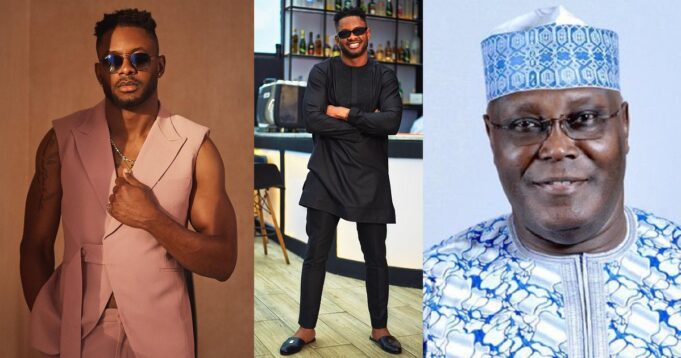 Former Big Brother Naija housemate, Cross Okonkwo, has opened up on his relationship with the presidential candidate of the Peoples Democratic Party (PDP), Atiku Abubakar.

It would be recalled that on June 2, Cross sparked mixed reactions on Twitter after he revealed that he had a video call with the former vice president whom he called his “father” and shared a screenshot as proof.

Some netizens asserted that he was paid to campaign for Atiku and other controversial opinions also made rounds online.

The Anambra-born reality show star has now spoken on his relationship with the presidential flagbearer in a recent interview with Punch.

According to him, Atiku is indeed like a father to him because he accommodated him when he had no where to go to.

“I have known him (Atiku) for many years. Me and his children have lived together and shared the same bed. When I did not have anywhere to go, he took me in. He has also taken care of me to an extent. That is the true definition of family. I know him very well and I believe he means well for the youth. I also think he is the best presidential candidate.

I was attacked after I made that tweet (about Atiku being my father), and I wondered why.”

Addressing claims of collecting money from the politician, Cross said,

“I cannot collect money from Atiku, and I have never collected money to campaign for any politician. If I eventually go into politics, it will be for the benefit of my constituency. However, I don’t want to become a politician because I don’t want people to insult me. ”