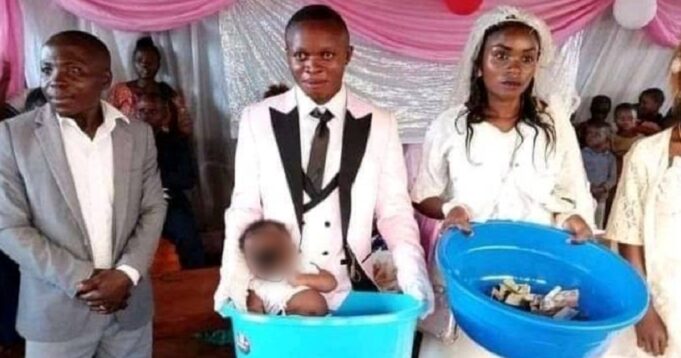 A rather bizarre incident occurred during a wedding ceremony that was held in Akwa Ibom State recently.

It was gathered that the groom, identified as Mr. Solomon Etim Usanga, from Ini Local Government Area of Akwa Ibom State, was taking his wedding vows with his bride when his ex-lover, with whom he has a child, stormed the venue with their child.

The baby’s mother, who is said to have attended the wedding solely to abandon the child with the father, went to the altar and dropped the baby in an offering bowl the groom was carrying.

A photo from the event that’s gone viral shows the baby inside the offering bowl the groom was carrying while his bride stood beside him.

“BABY MAMA ABANDONS BABY FOR COUPLE ON WEDDING DAY
A certain Mr. Solomon Etim Usanga of Ini LGA received the shock of his life on his wedding day as his estranged lover, Comfort Solomon stormed his wedding venue during offering and “offered” their love child to the father and walked away while the couple were holding offering basins to receive offerings for the church as is the practice in some denominations during wedding.”