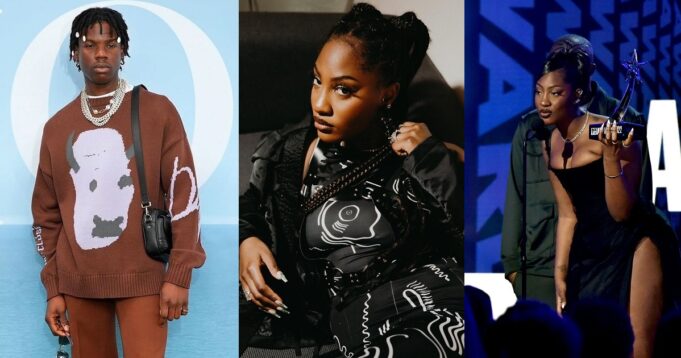 Respect has been demanded by netizens from Nigerian musician, Rema after he took to his Twitter page to affirm that sensational songstress, Tems is beautiful.

In a random tweet shared on his page, the 22-year-old “Calm down” hitmaker affirmed that 27-year-old talented singer-songwriter, Tems is a beautiful woman.

This prompted a number of tweeps to react to his statement with a lot of them demanding that he adds respect to her name since they are not in the same age bracket.

Many of them even went as far as recommending his label mate, Ayra Starr if he’s looking for someone to woo, as they declare that Tems is beyond his league.

Read some reactions as you scroll,

The annual award event which essentially honours people of colour, was held at the Microsoft Theater in Los Angeles to celebrate Black excellence in music, culture, and sports.

Tems was nominated for the award alongside artistes like Fireboy, Dave from the UK, Dinos from France, Fally Ipupa from Congo, Little Simz from the UK, Ludmilla from Brazil, Major League Djz from South Africa, and Tayc from France.

While receiving the award, the lovely who also bagged an award with Wizkid for their global hit track, “Essence”, gave a motivational speech to women worldwide on how they shouldn’t give up on their dreams.