Home Entertainment News Bobrisky reacts after caterer allegedly called him out over cost of housewarming... 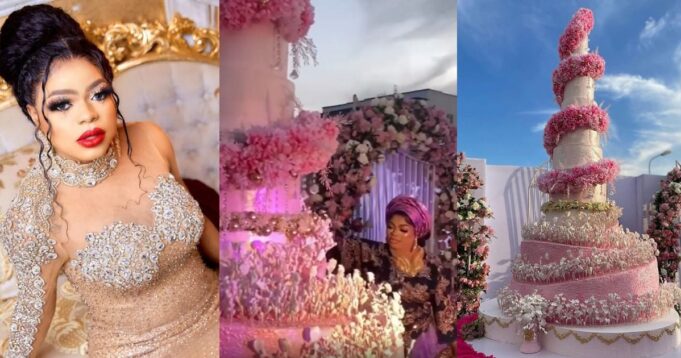 Crossdresser, Idris Okuneye, popularly known as Bobrisky, has reacted after he was allegedly called out by a caterer over the cost of his gigantic housewarming cake and reportedly defaulted on payment.

Bobrisky recently held a grand housewarming party to celebrate the completion of his N400 million mansion in Lekki, Lagos state.The exquisite party, which was held on June 19, 2022, was the talk of the town as there was more than enough to eat.

Another highlight of the event that caused a buzz online was the giant five-tier cake at the party that cost a whopping two million naira.

Sharing photos and videos of the giant cake, Bobrisky disclosed he spent N2 million on the cake.

Well, Bobrisky has now been called out by popular Instagram blogger, gistlover, who alleged that the cake cost seventy-five thousand naira (N75,0000) only, as opposed to the N2 million that Bobrisky claimed it cost.

The blogger also alleged that the caterer had called Bobrisky out for reportedly refusing to pay.

Reacting to the allegations, Bobrisky took to the comments of Gislover’s post to reiterate that he paid millions for the cake, while urging his fans to disregard the blogger’s claims as false.

“And you all believe dis lies 😂😂😂😂😂 if hater was a person. It’s a guy that made my cake not a girl stop fabricating stories. Omo I’m threat to many people 😂😂😂😂😂😂.cake that i paid millions dis goat said 75k ode”, Bobrisky wrote.