Home Entertainment News Burna Boy and his girlfriend, Stefflon Don unfollow each other on Instagram

Popular Nigerian singer, Burna Boy and his rapper girlfriend, Stefflon Don have unfollowed each other on photo-sharing app, Instagram.

A search through their Instagram followers shows they are not following each other anymore. This draws suspicion that there might be trouble in paradise.

However, the reason for this move is still unknown as two weeks ago, Steff defended her beau when he was being dragged online for not lending his voice to #EndSARS protest.

Recall that last year, the self-acclaimed “African Giant” unfollowed everyone on Instagram, leaving only his girlfriend, Steff.

Last year, Burnaboy was also accused of cheating on her with his ex-girlfriend after a video of the two surfaced online. However, the British rapper refuted the breakup allegations claiming the video was from the past.

In other news, Stefflon Don has revealed that Burnaboy is doing more than just tweeting as regards the #EndSars campaign.

She made the disclosure while adding her own voice to the cause.

I really do not get how ppl can be so Evil, especially against their own.
This shit makes me so sad

A fan then asked ;

He is doing something that will help out allot more than just sending out tweet, I promise.

“Let love lead” – Kemi Olunloyo finally apologizes to Davido, Linda Ikeji and other celebrities she has fought with 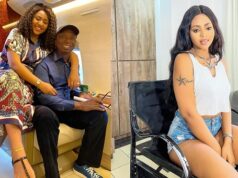 ”Oga Ned is well jarumatized” – Fan tells Regina Daniels after she showed off her ‘aphrodisiac dinner’.