Home Viral Cabbie narrates how he handled a “Lekki babe” who refused to stop... 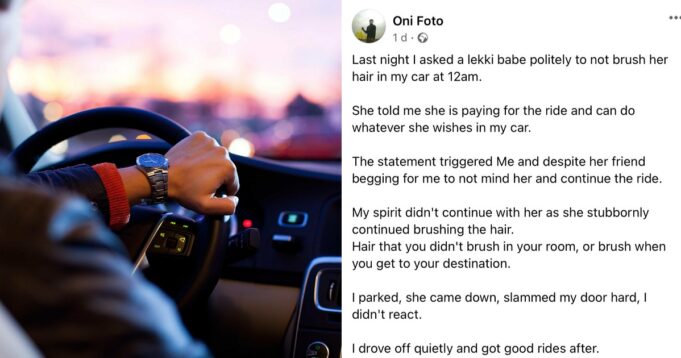 A cabman has narrated how he handled a “Lekki babe” who refused to stop brushing her hair in his car despite telling her not to.

The man identified as Oni Foto took to Facebook to recount his experience on Tuesday, June 5.

According to him, he picked up the lady around 12 midnight and she started brushing her hair in his car which he didn’t find comfortable so he politely told her to stop.

However, the lady gave him a rude response and told him she has the right to do anything she wants in his car because she is paying for the ride.

This didn’t sit well with the cabbie and he parked his car and made her come down without getting to her destination.

“Last night I asked a lekki babe politely to not brush her hair in my car at 12am.

She told me she is paying for the ride and can do whatever she wishes in my car.

The statement triggered Me and despite her friend begging for me to not mind her and continue the ride.

My spirit didn’t continue with her as she stubbornly continued brushing the hair.

Hair that you didn’t brush in your room, or brush when you get to your destination.

I parked, she came down, slammed my door hard, I didn’t react.

I drove off quietly and got good rides after.”