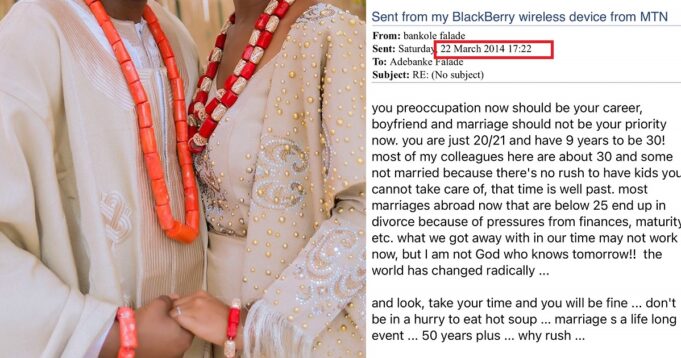 A Canada-based Nigerian lady has shared an email her father sent to her in 2014 advising her to focus on school work and self development.

The lady, identified as Adebanke Falade, who was 21 at the time took to Twitter to share a screenshot of the email.

Her father advised her not to be in a hurry to get married and instead focus on developing herself and acing her courses.

According to him, most people who got married below 25 ended up divorced because of the financial pressure and immaturity.

He further emphasized that she should take her time and not be in a “hurry to eat hot soup”.

See the email below…

In other news, a woman captured the horrifying moment lightning struck her husband’s truck with him and their kids inside on Friday evening, July 1.

The husband, Edward Whalen, and his family were driving down from St. Petersburg and heading back to their hotel when the unexpected occurred.

The lightning strike was captured by his wife, Michaelle, who was traveling in another vehicle that was trailing Whalen and their children in the truck.