Home Viral Chaos erupts at a funeral after a woman revealed the ‘last words... 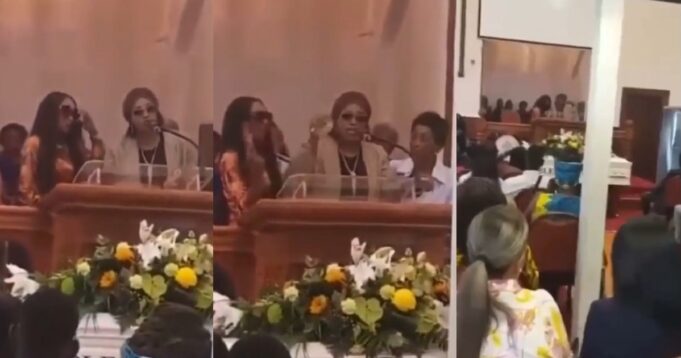 There was pandemonium at a funeral ceremony after a lady took to the podium to reveal the last things the deceased allegedly told her.

According to the lady who claimed to have spent three days with the deceased whose name was Paul before his death, he told her some things before he gave up the ghost.

She said when she asked the deceased why he was “over there”, he responded, saying his life was ‘cut short’. He also allegedly told her that his wife was “putting stuff in his food” implying that he was poisoned to death by his own wife.

After the woman made the shocking revelation at the funeral before family and friends of the deceased, there was commotion from all angles.

However, it’s not clear when and where the incident took place.

In other news, a video of a Nigerian groom lost in thought as his bride showed off incredible dance moves at their wedding reception has stirred hilarious reactions.

In the video that has gone viral after it was shared online, the happy bride who donned a black dress was joyfully dancing towards her husband while being accompanied by her friends, but the groom seemed to be ‘far away’, as he was lost in thought.

The groom appeared deeply engrossed in his thoughts and not paying attention to his dancing bride. Watch here