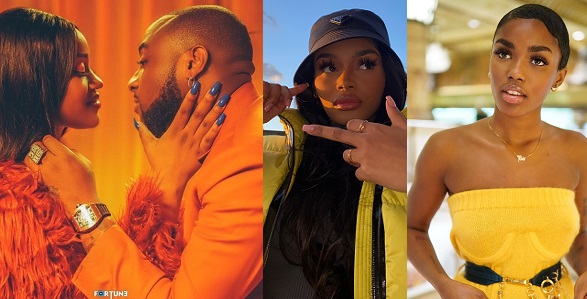 According to many Twitter users, the secret that the models have spilled about Davido on the platform may cause a rift between the music sensation and his Fiancée, Chioma.

A Twitter user @Thriftonabudget wrote, “Davido will wake up to begging his fiancée, Chioma”.

Another user @bekky_akins stated that the mother of one has had enough of his attitude.

In her words, “but Chioma has had enough of David’s attitude”.

Recall that, the father of three was accused of going out with popular British Instagram model, Eva Apio who invited her bestfriend Kenza as a plus 1, while his fiancé Chioma was pregnant with their son, Ifeanyi.

Amid their fight which centers on allegations of “jealousy and stalking”, the popular Nigerian singers name was mentioned.

According to Kenza, while she followed Davido and Eva as a plus one on the trip to Mykonos in Greece, she was made to look like an escort.

Following this revelation, Nigerians have taken to social media to condemn the singer, as many speculate that the singer will have a lot of explanations to say to his fiancée.