Home People “This one na comedy show” – Nigerians react to video of Kwankwaso’s... 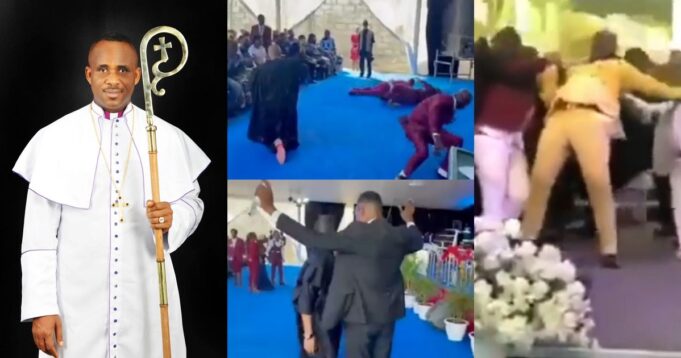 Barely 24 hours after the Presidential Candidate of the New Nigeria People’s Party, Rabiu Kwankwaso, picked his running mate, Bishop Isaac Idahosa, social media investigators have dug up videos of the clergyman performing deliverance in his church.

The videos have gotten people talking online as they pointed out his bizarre method of conducting deliverance on his congregants.

In the trending video, Bishop Idahosa is seen hitting his head on the chest of a congregant who then fell under the anointing and started shaking violently.

For another congregant, he acted like he was dribbling him and the effect seemingly caused the man to fall under the anointing.

In another video, the clergy was standing on the pulpit while some church officials stood behind him and touched his body. However, they started falling down one by one before they all fell down.

The videos has sparked mixed reactions on social media as netizens likened Bishop Idahosa’s church service to a comedy show.

@godson_chiji wrote, “I don’t understand… Ushers that are supposed to be holding people are falling and people are sitting and clapping?”

@iam_youngestjoe555 wrote, “Una no go kill me oneday 😂😂😂😂
All this nonsense only happens in Africa”

@ruby_sne wrote, “This people are the reason why Christianity seems like a joke. God is really merciful.”