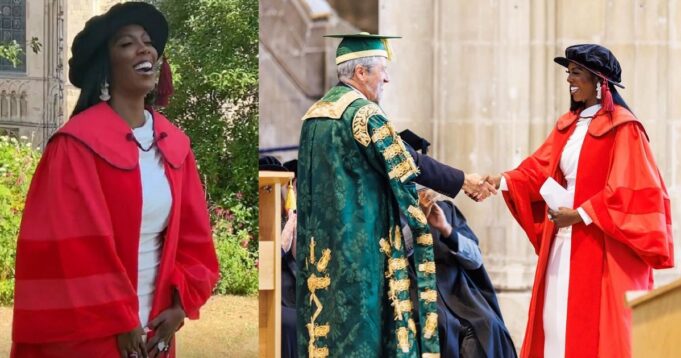 The 42-year-old graduate of Business Administration from the University of Kent, London, was conferred the degree for her outstanding achievement in the music industry worldwide.

The “somebody’s son” crooner completed a degree in Business Administration at the university and later won a scholarship to study Professional Music at the Berklee College of Music in Boston.

In photos and videos from the event that was held in Canterbury on Friday, July 15, the singer is seen dressed in her doctoral gown while being flanked by her son, Jamil, and other family members.

Sharing a brief biography of the international music act, the school wrote in part,

“Tiwa Savage is an award-winning singer-songwriter and Afrobeats star. She is best known for her hit singles such as ‘Mr Lova Lova’ ft Duncan Mighty, ‘Diet’ and ‘Tiwa’s Vibe’ all reaching the No. 1 spot across charts all over Africa and securing her position as one of Afrobeats’ leading artists. In 2019, she signed an exclusive recording contract with Universal Records and released her first global single titled ’49-99’ under Motown Records.

In November 2018, Tiwa was crowned Best African Act by the MTV European Music Awards and made history as the first female to win the accolade. In the same year, Tiwa became the first African female to sell out London’s IndigO2 and was handpicked by Coldplay’s Chris Martin to perform alongside Beyonce, Ed Sheeran and Jay Z live at the Global Citizen Festival in Johannesburg…”