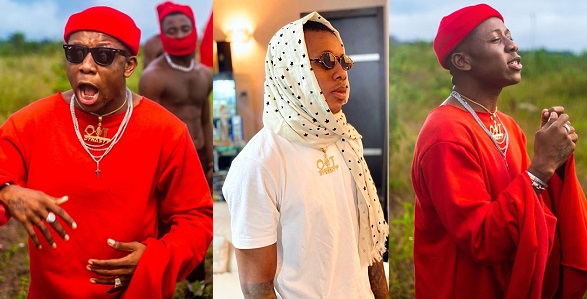 Twenty four year old Nigerian afro-pop artiste, Small Doctor has taken to social media to lament about the situation of things in Nigeria.

According to him, he is frustrated and tired of Nigeria.

“If I talk say I don tire, no be say I do exercise ooo . Na this country tire me.”

This is coming after a Nigerian activist, Kenechukwu Okeke filed a lawsuit against him and 49 other celebrities for their involvement in #EndSARS protest.

According to Okeke, the defendants used their twitter accounts to conspire amongst themselves to “commit misdemeanor, to wit promoting or acting in such a manner with intent to assist in the promotion of an unlawful assembly under the guise or composition of #EndSARS”

He claimed that the offence was punishable under Section 97 (2) of the Penal Code Act, C53 Laws of the Federation of Nigeria, 2004.

Recall that, the music artiste was actively involved in the protest against the infamous division of the Nigerian Police Force, SARS.

During the heat of the protest the singer, alongside other Nigerians were spotted matching around the famous Pen Cinema, Agege with banners having inscriptions that speaks against SARS officials.

Similarly, Small Doctor took the #EndSARS campaign to his white garment church in Lagos, to protest against police brutality in the country.