Home Viral “Dating a guy still living with his parents is very wrong” –... 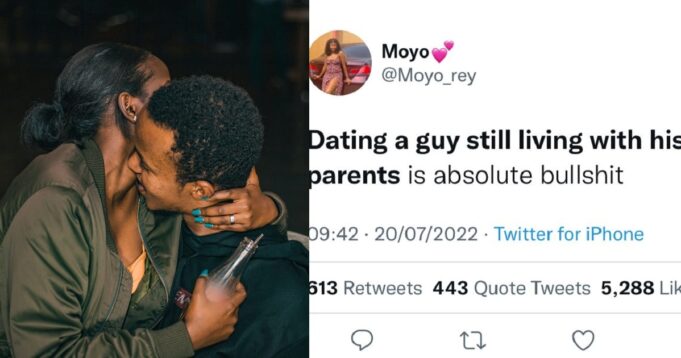 A Nigerian lady has sparked a debate on Twitter after she opined that it is wrong for women to date a man who still lives with his parents.

In a post on the micro-blogging platform, the young lady suggested that grown men who still live with their parents should not be in a relationship.

She asserted that the majority would concur with her that it is utterly inappropriate for a woman to have a love relationship with a man who still stays under the same roof as his parents.

“Dating a guy still living with his parents is absolute bullshit”, she wrote.

The tweet quickly became a debate on the platform, with tweeps flocking to the comments section to voice their contrasting opinions on the topic.

@misshils0011 wrote, “Adulthood is hard abeg. He should leave free accommodation because he wants you to be right. He can get an apartment when he wants to get married”.

@ejiakupedro, “Make nobody stress me,Jesus lived in his father house for …….you know the rest”.

@lexxiesage, “So dating a lady that stays with her peepz is right bah?? Babe wey no fit rent one room at least just asking respectfully Biko 😂”

@naijahuzlers, “O wrong na, so long as he has future plans for both of you”.