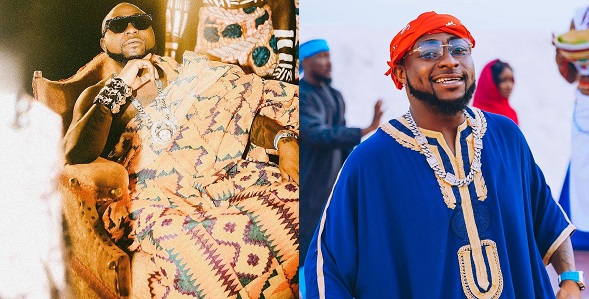 Popular Music Executive, David Adeleke popularly known as Davido has shared photos of him rocking a Ghanaian royal outfit, in celebration of his 28th birthday.

The billionaire’s son is a year older today, November 21 and social media has been flooded with pictures of the celebrity and birthday wishes.

To celebrate his new age, his fiancee and mother of one, Chioma gifted him with a unique birthday present.

It’s no news that the music sensation adores his late mum, Veronica Imade Adeleke and Chioma has gifted him with a beautiful neck chain an image of him and his mother. See the photo here.

Sharing photos of the thoughtful gift on his Instagram story, he wrote,

“me and my mother, emotional thank you @chefchi”.

The ‘FEM’ crooner has now taken to Instagram to share a photo of him adorning a traditional royal attire to mark his birthday.