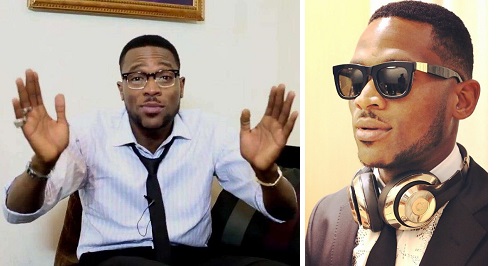 Nigerian Singer, D’Banj, who recently signed a new global distribution deal with Priority Records, has revealed why he hid his marital status from the public and fans until recently.

The ‘Koko Master’ was a guest at BEAT FM 99.9 on Thursday evening and he disclosed that his marital status had been a talking point for years in the media and he decided to keep everything under wraps until the marriage with girlfriend, Lineo Didi Kilgrow was consummated.

He added that the pressure to get married was much even from his parents and thanked God every thing worked according to plans.

“I decided to keep my marriage to Didi a secret because based on experience relationships like this get mixed with media hypes and speculations and then it becomes complicated.

I want to thank my close friends, parent and families for keeping this secret.

You know the pressure to get married was this high and mum told me she wants to see the girl I am dating and would want to marry.

I told her that there was this babe and we didn’t want to marry yet but she insisted that I’d she was the one for me that we should have a small ceremony and the rest is history.

I’m glad I listened to her,”

The ‘Fall in Love’ Crooner who was his jovial self and eclectic, did not tell when the white wedding will hold but he disclosed that it will be held when they are both ready for it.

Recall, D’Banj got married secretly to his girlfriend, Miss Didi Kilgrow last year, July 2, 2016 and now they have a baby boy named Daniel, months ago.

The singer who dropped a video from his recent album, KingdonCome, is one of the entertainers of modern era who has shaped pop culture in Nigeria and the African continent.

He announced recently that his Cream Records aimed to assist young artistes was worth 100 million dollars.