Home Viral “I have been dead inside for too long” – Young man writes... 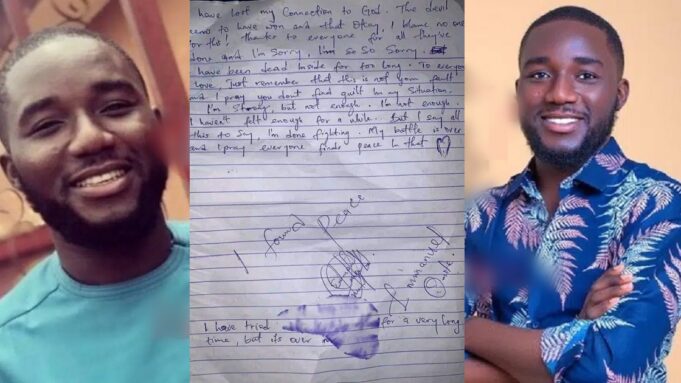 Omole, a talented photographer, is said to have ended it all in his residence in Abuja over “life issues”.

According to viral reports, Emmanuel Omole left a suicide note, recounting his life struggles and how he saw himself as a failure in life.

Omole claimed in a note excerpt that is currently making the rounds online that he tried for a very long time to hold it down but ultimately chose suicide in the pursuit of peace.

He apologized to his loved ones and declared that he had finally found peace.

Read the note below,

In other news, a newly wedded couple have both lost their lives in a fatal accident while returning from their traditional wedding ceremony in Delta state.

The groom, Kelvin, and his new bride, Evi, got married on Wednesday, June 21, and were on their way home after the event when they were involved in the road accident that claimed their lives.

The couple, who acquired the car involved in the accident only two weeks ago, died alongside the driver and the groom’s best friend, Timi.

Kelvin and Evi were billed to have their white wedding this weekend.