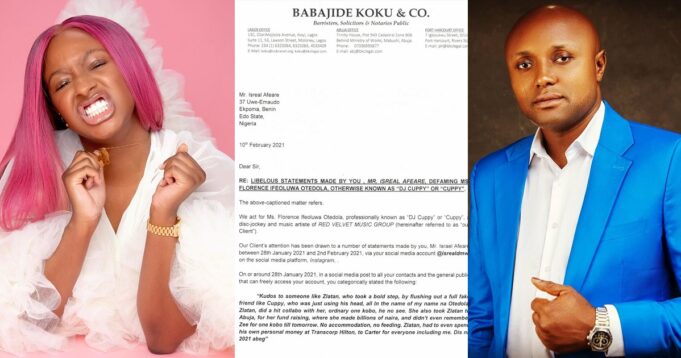 Recall the Gelato crooner came out to hint that she did not breach any contractual agreement regarding the song Gelato, which she made with Zlatan Ibile.

This came after Davido’s personal logistic manager, Isreal DMW, alleged that following the music collaboration between Cuppy and Zlatan, the DJ failed to give Zlatan money. He also claimed that Cuppy took the singer to Abuja for her fund raising where she made billions of Naira but refused to give Zlatan money.

In reaction to the allegations against her by Isreal, DJ Cuppy threatened to sue him for libel and defamation.

The billionaire daughter has now carried out her threat as her lawyers have served Davido’s aide whose full name is Isreal Afeare a legal notice, demanding a public apology from him over his claim that Zlatan didn’t make any money from their hit song, Gelato.

Cuppy also demanded a withdrawal of his statement which will be publicly shared, and a letter of undertaking to cease and desist from publishing these allegations or similar allegations. A compensation or further actions will be taking against him if he fails to respond within five days of receiving the notice.