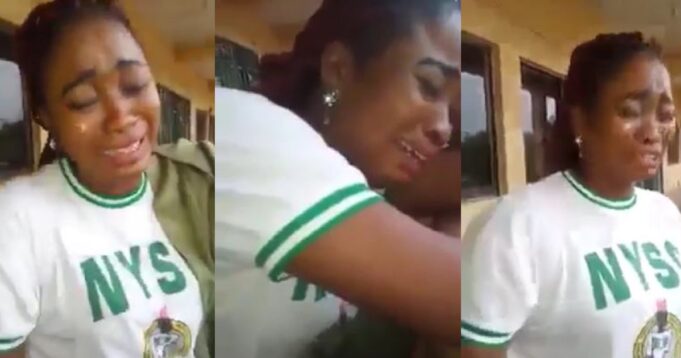 A video serving the rounds online has captured the moment a corps member broke down in tears during the NYSC passing out parade, expressing her desire to continue serving her fatherland.

In the viral clip, the lady blames the scheme for issuing her a certificate, as she wasn’t ready to end her service year.

The 2021 Batch B Stream 1 corps members had their Passing-Out-Parade (P.O.P) yesterday, July 7. However, while the majority are eager and ready to hit the labor market, it appears this young lady is not.

Amid tears, she noted that she wants to continue serving the nation and receiving the N33,000 allowance every month.

In other news, a young Nigerian lady identified as Uwaoma Susan Joseph has gone viral on social media after she showed off what she was able to achieve with her NYSC allowance.

According to Susan, she purchased a keke by saving the allowance given to her monthly by NYSC.

Uwaoma revealed she was earning N19,800 from NYSC and from her Primary Place of Assignment, N20,000. She stated that she saved up the monies and realized a total of N432,000.

Susan, a graduate of estate management graduate who recently completed the mandatory one-year service, shared photos of the keke on Facebook, and she has since been praised by social media users.