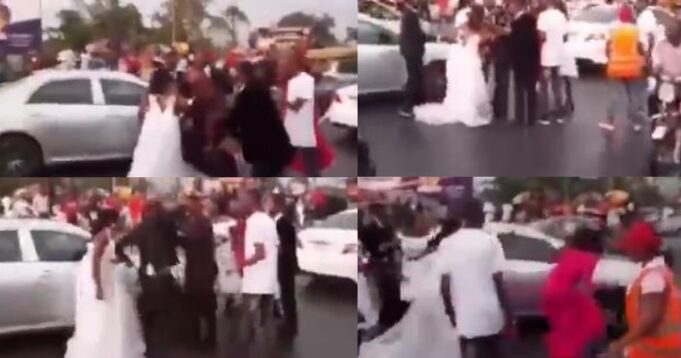 A video serving rounds on social media claimed that a bride on the way to her church wedding caused a scene on an expressway after she found out that her husband-to-be cheated.

The report is FALSE.

The video clip shows a church group performing a street play, not a real couple fighting.

AFP Fact Check reports that the footage was a publicity stunt called “Romeo and Juliet”, performed by a church group to raise awareness about their annual Valentine’s Day programme.

Using the InVID WeVerify tool, AFP Fact Check ran several reverse image searches on keyframes of the video and traced the viral footage to a similar clip published on this Facebook page.

The page is run by a branch of Gateway International Church (GIC) located in Choba, a university area in Port-Harcourt. GIC is one of the most popular Pentecostal churches in Rivers state with a large youth congregation.

The GIC video features the same people seen in the viral footage, including the supposed bride and groom.

“Romeo and Juliet rally/offline publicity was a blast, exceptional creativity!” reads the caption on the Facebook post published by the church on February 12, 2021.

At the 1’ 15” mark, the crowd in the video clip can be seen dancing to a song while the hype man says “Romeo and Juliet”.