Home News #EndSARS: Hoodlum who raided a police station and carted away a rifle...

Sunday Effiong a suspected hoodlum, alleged to be one the thugs who hijacked the EndSARS protest in Edo and was involved in the looting of a police station in the state has been arrested.

Effiong who was paraded by the Edo state police command on Monday, November 23rd, was identified in a viral video that captured him leaving the Oba Market police station with an AK-47 rifle after he and other hoodlums had raided the police station on October 19th.

According to the police, the suspect formed a robbery gang that has been terrorizing Benin and it’s environs until his arrest.

Recall that in October, the call against police brutality which started off as a peaceful protest was hijacked by hoodlums and caused chaos in different parts of the country.

The hoodlums were involved in razing down shops, private and government owned establishment, looting of warehouses amongst other vices 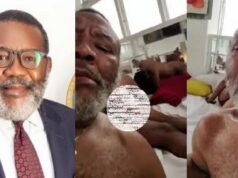