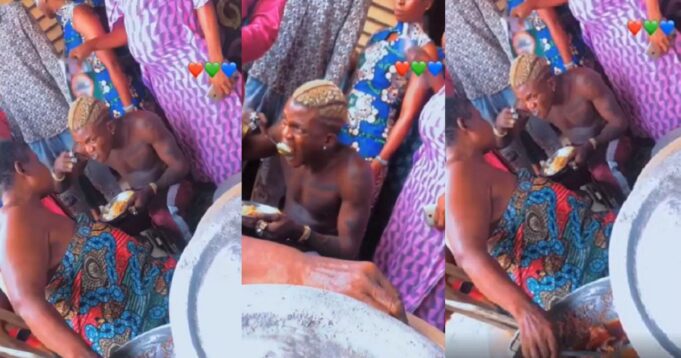 A viral video showing controversial singer Portable eating at a local restaurant with an elderly woman fanning him has stirred reactions online.

The street hip-hop singer, who rose to prominence after music icon Olamide jumped on his Zazu Zeh track, chose to dine at a local restaurant known as Mama Put. Well, trust them to give him a kingly treat.

In a video that surfaced online, Portable is seen devouring a plate of rice while an elderly woman, guessed to be one of the attendants at the restaurant, fanned him while he ate.

The video, which quickly went viral after being shared online, shows the singer eating and conversing with the food vendor while another woman stands behind him fanning him with a book.

This, however, didn’t sit well with Nigerians who didn’t hesitate to point out what they believe is not morally right in the video.

Reacting, some netizens noted that, as a Yoruba man, it was wrong for the singer to allow the elderly woman to fan him while he ate. They stated that he should have refused even if she had insisted.

In other news, Portable has opened up about why he dropped out of school.

The Zazu Zeh star in a recent interview on Jahbless Original Intelligence Podcast, said he left school to focus on his music career because music is a money-making machine.

According to him, he was certain he would make it through music so he decided to drop out of school to focus on music.

“Music brings money and is a fast money-making machine. If you sing you must have money unless you’re not good at it, if you’re a musician, you must be rich. I observed that I make a lot of money whenever I sing.” He said.