Home News FG releases bio-data of the 64 Boko Haram terrorists who escaped from... 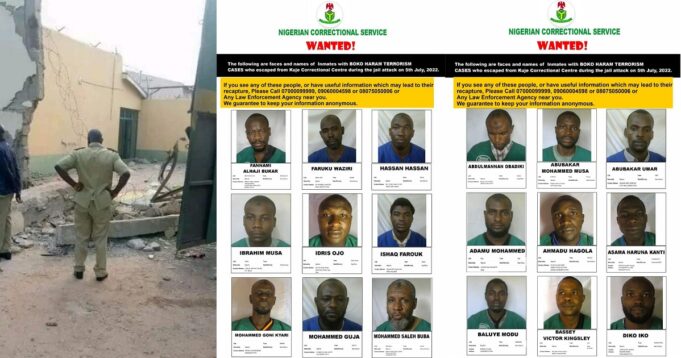 The Federal Government has released the names and pictures of the 64 Boko Haram terrorists who escaped from Kuje Medium Security Custodial Centre in the Federal Capital Territory, Abuja.

It was gathered that it was a coordinated attack by the terrorist group to release their embattled colleagues being held in the facility. She photos from the correctional facility after the attack here.

The Nigerian Correctional Service have now declared wanted all the 64 Boko Haram terrorists who escaped.

Their personal information was released by the Service Public Relations Officer, Abubakar Umar, on Friday July 8.

As at the time of filing this report, 445 fleeing inmates have been caught however none of the fleeing Boko Haram terrorists have been recaptured.

See the bio-data of the escapees below,

She photos from the correctional facility after the attack here.

The spokesman of the Nigerian Correctional Service, AD Umar, who confirmed the incident said,

“I wish to confirm that about 2200hrs, some yet-to-be-identified gunmen attacked the Medium Security Custodial Centre, Kuje in the Federal Capital Territory.

However, men of the Armed Squad of the Nigerian Correctional Service and other security agencies attached to the Custodial centre have responded and calm has been restored to the facility and the situation is under control.”