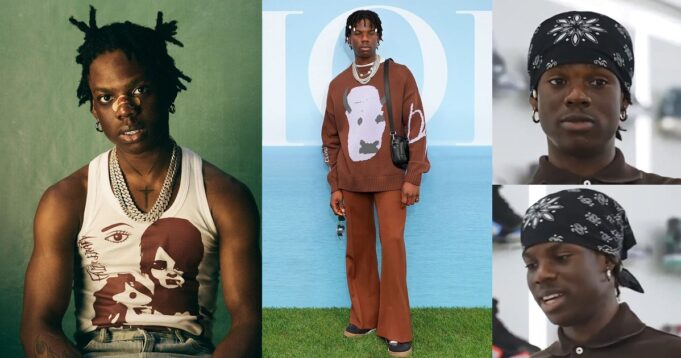 Popular Nigerian singer, Divine Ikubor better known by his stage name ‘Rema’, has revealed the craziest experience he has had with female fans.

The ‘Soundgasm’ crooner in a recent interview on Shopping for Sneakers, disclosed that four girls showed up at his hotel room in the middle of the night.

According to the 22-year-old singer who travelled to the city for a show and was lodged in an hotel room by the show promoter, he heard a knock on his door around 3am and opened up thinking it was one of his friends only to see four ladies standing outside.

The Mavin and Jonzing Records artiste said they wanted to snap pictures with him but deep down he knew they wanted something more from him.

He said he was pissed by the incident and called his manager who later moved him to another room to prevent a reoccurrence.

He noted that he appreciates the love he receives from his female fans but sometimes it can be extreme.

A while ago, Rema opened up about his relationship with his colleagues, Joe Boy, Fireboy, and Omah Lay in a recent interview.

The ‘calm down’ crooner, in a chat with media personality Ebuka Obi-Uchendu on Rubbin Minds, said there’s a cordial relationship between them.

He, however, stated that because of their individual busy schedules, they rarely communicate, but it’s all love when they meet.

He named Joeboy, Buju (BNXN), and Omah Lay when asked about some stars he would like to work with soonest.