A fresh graduate from Anambra State University (ANSU), Kamsi Okonkwo aka Dmode, has died in a fatal car accident, just days after he posted about death on Facebook.

Kamsi, who graduated in February 2021, died on Wednesday, April 7, on his way back from an event in Nsukka, Enugu State.

It was gathered that a trailer carrying cement fell on their bus at 9th Mile, Enugu. Four passengers inside the fully loaded bus reportedly died in the accident, while others are currently hospitalized.

Kamsi’s death comes days after he shared his opinion about death on Facebook.

He had written, “Once the remedy to death is found that’s the end.”

His friends have taken to social media to mourn his sudden death.

In other news, A young Nigerian lady identified as Blessing Nyityo has allegedly died from a head injury she sustained after falling on a hard surface.

According to Blessing’s brother, the University of Mkar graduate who was fondly called Viju, went into coma after she slumped and hit her head somewhere on Easter Sunday, April 4. She was rushed to the hospital where she later died.

Benue activist, Ukan Kurugh, who confirmed the sad incident on Monday, April 5, stated that he called her sister after the incident and she assured her that Blessing will come out of coma. Continue reading here. 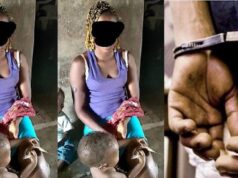