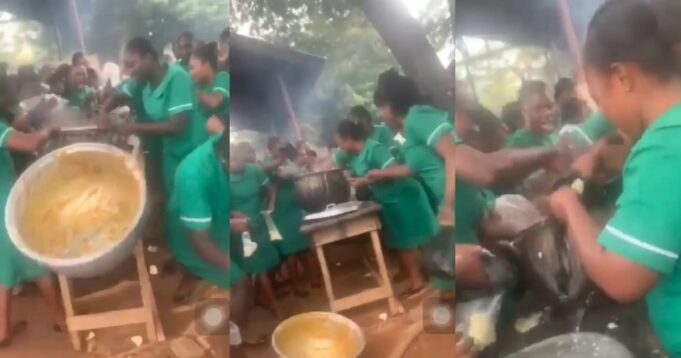 A video which shows a set of Ghanaian nursing students fighting tooth and nail over food has gone viral on social media.

The nursing students in the video can be seen trying to get food from a large, steaming cooking pot and kept on pushing each other just so they could get a share.

The video has been received with varying reactions as it was also gathered that the nursing students have not received their allowances from the Ghanaian government in the last few months.

In other news, a 23-year-old final year medical student, Lebo Mandy Makola, who was allegedly killed by her boyfriend, Admiral Rakgwana Mampuru, after she tried to end their relationship, has been laid to rest.

It was gathered that the 23-year-old was allegedly stabbed to death by her boyfriend, Admiral Rakgwana Mampuru, on July 11, 2022.

Police suspect that she was allegedly killed by her boyfriend, who was also found dead the next day, of an apparent suicide. Makola’s boyfriend committed suicide by hanging himself from a tree at Mashite Cross in Ga Mphahlele on July 12.

It is alleged that Makola wanted to end the relationship, and her attempts led to the killing.

Her body was discovered by a herdsman, who alerted the police. The police searched the area and later found the boyfriend’s body hanging from a tree.