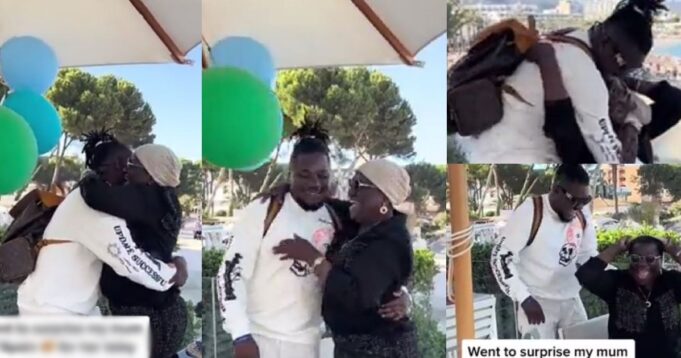 Nigerian rapper, Sodiq Abubakar Yusuf, popularly known as CDQ, has shared a video which captured the heartwarming moment he reunited with his mum after three years apart.

The indigenous hip-hop rapper paid a surprise visit to his mum in Spain, and his mother’s reaction when she saw her son, whom she had not seen for the past three years, was priceless.

In the video, he sneaked up on her while she was lounging on the beach, and the moment his mother spotted him, she yelled, “Allahu Akbar.”

The excited mother also chanted her son’s favourite line, “CDQ yeah yeah,” as they gave each other a warm embrace.

In other news, music icon, Ayodeji Balogun, popularly known as Wizkid, has declared his love for his colleagues, Davido and Burna Boy.

Much to the delight of fans, the Grammy award winner declared during his performance last night at the 2022 Afro Nation music festival that he’s got lots of love for fellow superstar singers, Davido and Burna Boy.

He went on to thank the fans for supporting them.

“I want to tell you something tonight, I got Love for Burna Boy and Davido. And I want to thank you the fans for supporting us, we won’t be here without you”, He said.