Two people have been reported dead yesterday, Sunday morning after a truck crushed a herdsman in Ogun state in an accident which occurred at Obada Oko area along the old Lagos-Abeokuta expressway, Abeokuta.

The accident occurred around 2:00 am on Sunday morning when a group of Fulani herdsmen were rearing their cattle along the expressway at Obada Oko in the Ewekoro local government area of the state.

It was gathered that the driver of the sand filled Austin tipper truck only sighted the herdsmen and their cattle on the expressway at the last minute and while attempting to apply his break he lost control.

The driver of the tipper truck and his motor-boy, whose identities could not be ascertained as at the time of filing this report died on the spot after their truck had veered off the expressway and crashed into the bush.

One of the cows was also reportedly killed in the process. 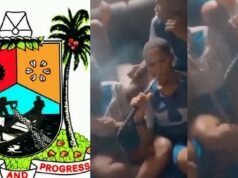