Home Viral “I want to be a lawyer” – Child hawker declares he won’t... 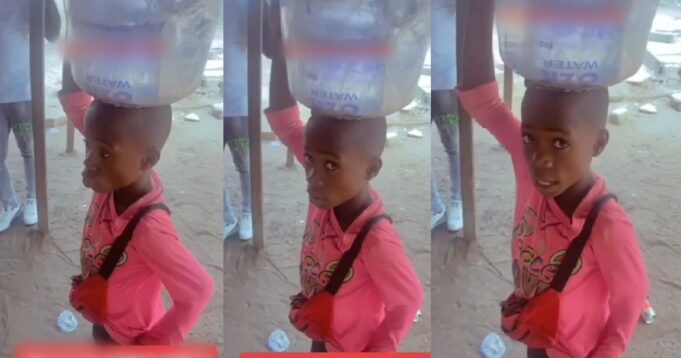 A little boy who hawks sachet (pure) water was recorded saying he’ll rather become a lawyer than delve into internet fraud “Yahoo Yahoo” because it is a vile act that’s capable of spoiling his life.

The little boy was interviewed by some adults who asked him whether he would consider doing “yahoo yahoo” to help his family.

The young lad then revealed that he would not like to go into internet fraud, however if he ever finds himself doing it due to hardship, he only would just be involved in the regular yahoo yahoo.

The young man shared that he would rather not go into Yahoo Plus because that will require him to use a family member to make money.

The adults who interviewed him then decided to ask what he wants to be in life when he grows up, and he responded saying he wants to be a lawyer who will make money through the profession.

In massive contrast to this young kid, the video of a group of little boys said to be around the ages of 14 to 15 and were “stranded” but looking for a place to learn yahoo-yahoo (online fraud) shook the internet at the time it was shared earlier this year.

The young men in the video were being queried by a man whose gate they knocked on in an area in Edo state. The lads who are around the ages of 14 to 15, told the man who queried them that they “want to hustle”, which they later clarified to mean yahoo-yahoo (online fraud) and not yahoo plus (online fraud+rituals).